Any frame is a thrown voice - Camden Art Centre

Any frame is a thrown voice

Any frame is a thrown voice was the first major exhibition reflecting on White’s work and includes re-presentations of many significant projects and performances.

White’s works have radically different starting points: the paintings of Thomas Gainsborough, the wall labels at Tate, a film archive in Berlin, listings from a gay cruising website. Any frame is a thrown voice revisits several of these key works, rearticulating them as installations, documentary materials, or performances reimagined by contemporary artists. As such, the exhibition engaged with some of the issues White was most keenly concerned with: the notion of “liveness” in a screening or event, the challenges involved in re-performance of historical works, and the vital role of the audience member.

Any frame is a thrown voice was speculative thinking aloud about the future life of White’s works, exploring how they may act as a catalyst in the present rather than as relics of the past.

Ian White (1971–2013) was an artist, curator and writer. His performances – both solo and collaborative – were staged at venues including Tate Britain and Tate Modern, London; the Chisenhale Gallery, London; Jeu de Paume, Paris, and the Museum of Modern Art, New York. White organised many influential screenings, events and exhibitions for venues including The Horse Hospital, LUX and the Whitechapel Gallery, London; Kino Arsenal, Berlin; and the International Short Film Festival Oberhausen. He taught extensively, holding positions at Goldsmiths’ Department of Art and the Dutch Art Institute amongst others, and was leader of the LUX Associate Artists Programme (2007-13), an experimental post-graduate programme for artists working with the moving image.

Performance: IBIZA: a reading for ‘The Flicker’ and Black Flags

Sharon Hayes has been engaged in an art practice that uses multiple mediums – video, performance, and installation in an ongoing investigation into various intersections between history, politics and speech.  Her work is concerned with developing new representational strategies that examine and interrogate the present political moment, not as a moment without historical foundation but as one that is always allegorical, a moment that reaches simultaneously backwards and forwards.

Hayes’ work has been shown at the New Museum, the Guggenheim Museum, MoMA PS1, Art in General, Artists Space, New York, amongst others. Her work was included in the 2010 Whitney Biennial, New York, the 2009 Istanbul Biennial, the Yokohama Triennial, Guangzhou Triennial (both 2008), and PERFORMA05. Her collaborative piece, 9 Scripts from a Nation at War, made with Andrea Geyer, Ashley Hunt, Katya Sander and David Thorne was shown in Documenta 12 in Kassel, Germany and subsequently at the Tate Modern in London and REDCAT in Los Angeles. Hayes is an Assistant Professor at the Cooper Union. She is represented by Tanya Leighton Gallery, Berlin.

An evening for educators to visit the new exhibitions Sleep Rock and Any frame is a thrown voice, take part in an informal tour of the show with the education team, and meet other education professionals over a glass of wine.

The team will launch the new Educators’ Resource. This guide provides activities and conversation points for students of all ages and is designed to support educators in structuring a visit to the centre and in planning related lessons.

This event is suited to teachers and anyone working in arts and education.

A Recipe for Disaster, 2017, video, 27 min (looped projection) by Carolyn Lazard in the Artists’ Studio

The first broadcasted content with captions on US television was an episode of The French Chef on WGBH in Boston in 1972. A Recipe for Disaster engages this historical moment to produce a materialist video and manifesto about media accessibility and segregated viewership.

Carolyn Lazard (b.1987) is an artist working in video, installation, sound, and performance. They have screened and exhibited work at Essex Street Gallery (New York), Anthology Film Archives (New York), The Kitchen (New York), New Museum (New York), Wexner Center for the Arts (Ohio), The Arnolfini (UK) and the Stedelijk Museum (NL). They have published writing in the Brooklyn Rail and Mousse Magazine. Lazard holds a BA from Bard College and lives in Philadelphia.

I Can Hear My Mother’s Voice, 2017, video, 5 minutes. Directed and edited by Jordan Lord; shot and narrated by Deborah Lord.
“Though framed by what my mother sees, the form of this video seeks to expand the frame around the ocularcentrism of film and video by combining forms of memory with descriptive audio.” – Jordan Lord

Kathleen Collins (b.1942) was an African-American playwright, writer, filmmaker, director, civil rights activist, and educator from Jersey City, New Jersey. Collins wrote and directed two feature-length fiction films The Cruz Brothers and Miss Malloy (1980) and Losing Ground (1982). Collins plays and screenplays include In the Midnight Hour (1981) and The Brothers (1982). Collins’ short stories are published under the title Whatever Happened to Interracial Love?, Granta, 2016. From 1974 Collins was Professor of film history and screenwriting at City College at the City University of New York.

Jordan Lord is an artist, writer, and filmmaker who works primarily in video, text, and performance. His work is concerned with historical, financial, and emotional debts; expanded cinema and documentary; and what frames cut out. Since 2012, he has been a member of No Total, a collective of performers and a reading group that has both shown work and organised a number of performances at Artists Space Books & Talks and Arika Episode 4: Freedom Is a Constant Struggle. In 2017, he organized a series of screenings at the CUNY Graduate Center, entitled “‘Recording and Performing’: Apparatuses of Capture, Documentary, and Liveness in Artists’ Cinema,” which brought together a number of artists and filmmakers in a format inspired by Ian White’s practice as a curator, writer, teacher, and artist.

Adrian Rifkin is a writer, art historian and sometime art teacher. Rifkin works with film and cinema, classical and popular music, canonical art and mass imagery, literature and pornography. His writing and essays can be found on his website.

Julie Cunningham is a dancer and choreographer. Cunningham launched Julie Cunningham & Company in 2017 which debuted at the Barbican with a double bill about gender and identity. The Company have presented new works at the Victoria & Albert Museum, the Southbank Centre and Dance Base – the British Council Showcase at the Edinburgh Fringe Festival. Cunningham is the Leverhulme Choreography fellow at Rambert.

Camden Arts Centre Curator Gina Buenfeld leads a tour on the final day of the exhibitions Sadie Benning: Sleep Rock and Ian White: Any frame is a thrown voice. 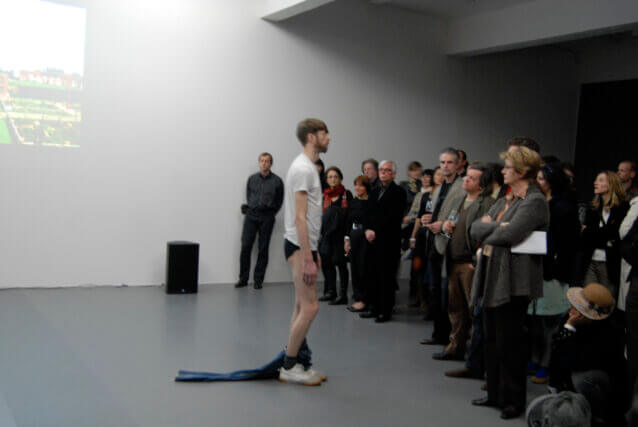